The industry for interior doors in Europe increased its sales by 3.4% last year, thus increasing the business volume in the countries under investigation to over 1.8 billion Euros. This trend should continue at the same pace in the next few years due to the positive development in the construction sector, as a new study by Interconnection Consulting shows.

Brexit is showing its teeth

With a share of 37%, Germany is by far the largest market for interior doors in Europe.

After an increase of 1.7% in volume, the industry grew once again in growth in 2016 (+ 3.7%). Interconnection assesses the foreseeable future also very positively in its study. 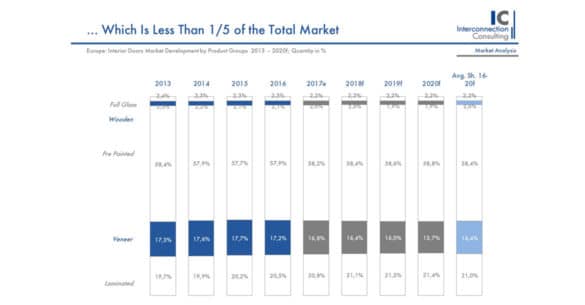 The industry is expected to increase its sales by 4.5% annually by 2020. While Germany is experiencing growth, in the United Kingdom growth is declining due to market uncertainties as a result of the Brexit, Martha Kushlyk, author of the study, explains.

After growth rates of 5.9% and 4.6% in 2014 and 2015, the industry grew last year by 4.2%. Despite the decline in the construction industry, construction projects that had not yet been completed before the Brexit vote supported the industry.

In 2017 the development will slow down significantly and the industry for interior doors will only generate a growth of 0.9% in volume.

After years of recession, the French construction sector was once again able to show a sign of life, which was mainly thanks to residential construction.

This was also the prerequisite for an increase in the industry (+ 1.9% in quantity). A similar development is reported by Belgium, which ultimately managed to free itself from the red figures with a growth of 2.6% in quantity.

The industry is also supported by a well-developed construction sector and a rising Gross Domestic Product.

The market for interior doors in the Netherlands has already experienced several successful years. And the market will continue to grow strongly in the near future.

By 2020 an average increase of 6.0% per year is expected by Interconnection.

Pre-colored and inexpensive doors are the trend

57.8% of all standard interior doors are pre-colored. This trend will continue in the future.

Thus the average growth of this type will be 4% per year by 2020. This product group of the pre-colored interior doors represents above all the favorable price segment, which is predominant in Europe (70.8%).

The second most important product group is the laminated doors. This product type even shows a stronger growth (+ 4.8/year to 2020) than the pre-colored doors.

New construction as a guarantee of growth

The construction sector has been booming in Europe since 2014, mainly as far as new construction is concerned.

The latter has the largest share of the total market, accounting for almost two-thirds (64.7%). As the construction sector continues to maintain its momentum, the new segment will grow at 4.1% per annum by 2020.

The European door-to-door market is relatively concentrated. The top 10 companies hold 55.7% of the market shares.

All in all, the top six places were able to increase their market shares last year. The list of top companies is dominated by the US giants Premdor and Jeld Wen and some European companies such as Prüm-Garant and Herholz.